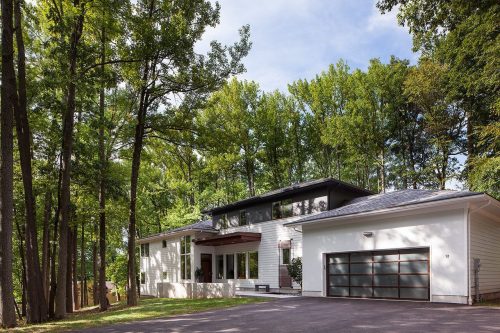 Most contractors would have torn down the early 1960’s home on the spot. However, with our help, a Northern New Jersey couple was drawn to the potential and possibilities this mid-century split-level had to offer.  They wanted to stay local in Scotch Plains and incorporate their native Vastu design elements (the traditional Hindu approach to harmony in home and architecture) into a customized, unique home.

Vastu principles of design were important in determining locations and layouts of the house; owners and architect collaborated at every stage. The house was a typical split-level that had never been renovated before. As with most split-levels, it was built economically and appeared similar to those around it. Half stairs separated the levels, yet seemed to interrupt the flow of the layout, although it was convenient to go up only a short flight to the bedrooms.

The original design here was unoriginal, with a living room and dining room on the main level alongside a separate area for the kitchen. Going down a few stairs led to the laundry room and then a garage, making the house feel more like a maze for the new owners than a place to call home. It needed a transformation from mid-century to modern.

Keeping in mind the Vastu design principles, we wanted to give the couple a home that felt uniquely theirs while still maintaining the positive aspects a split-level home offers. Working with the inherent structure gave us the ideas for distinctive designs we wouldn’t have come up with if we were starting a new house instead of renovating. 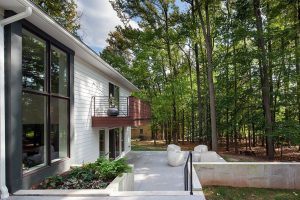 While we were able to maintain the foundation, some of the walls and roof, the rest had to be gutted. However, the remaining essential elements made it possible for us to open up the main level into a lofty space. We moved the garage to construct a much more usable space for the lower level and opened up the staircase in a dramatic way to create a profound new sense of connection throughout the home. Stepping down to the lower level no longer felt like entering a basement (with another basement below that); instead, we created meaningful spatial relationships. It was in many ways better than building something new.

This article was written by Gary Rosard of Gary Rosard Architects. See before and after photos and continue reading about this renovation project here: https://www.garyrosard.com/Scotch-Plains-In-Progress.

A Unique Contemporary Home: Natural and Reclaimed Materials on the Interior and Exterior