Architect News
From the Studio
By Eric Lam 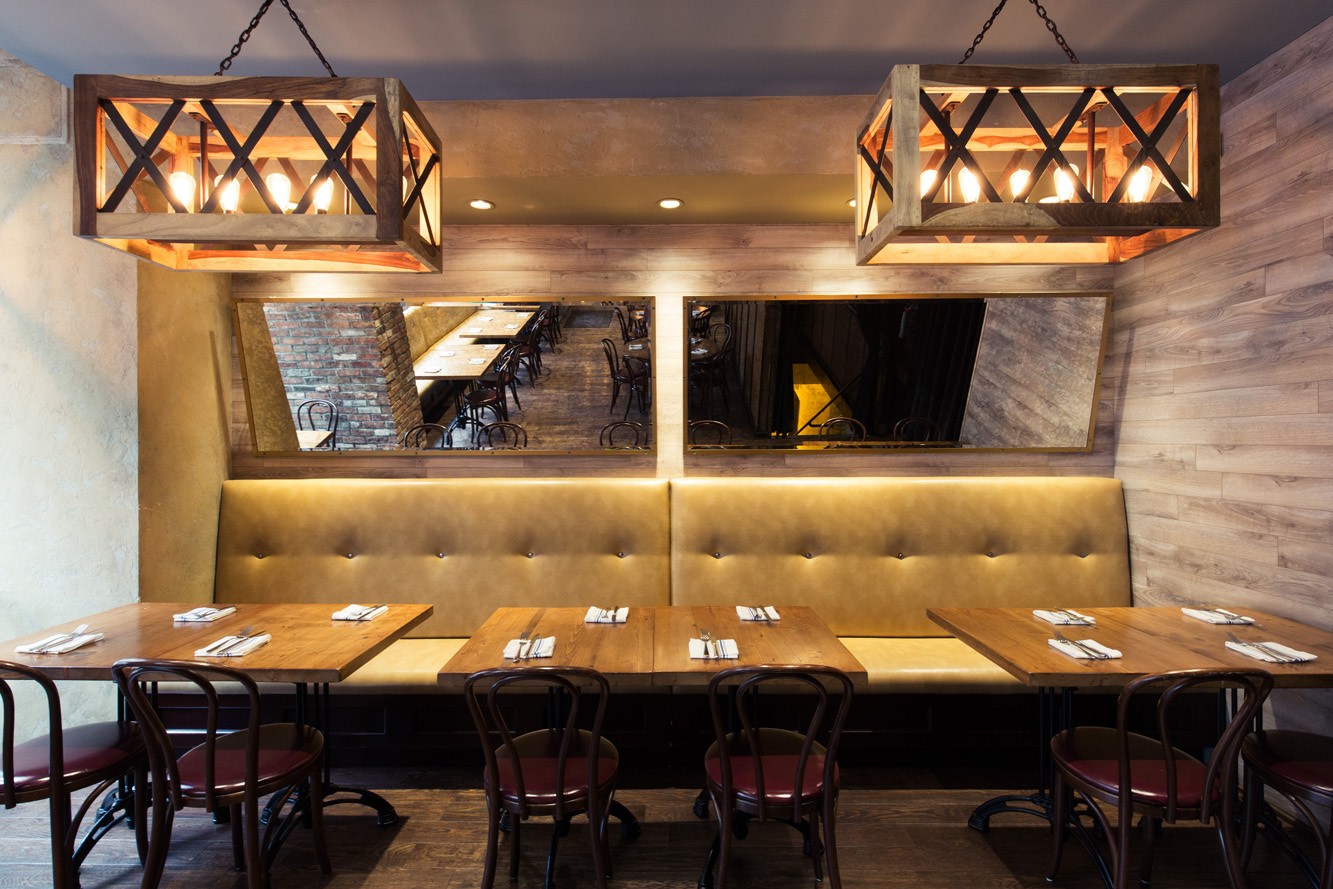 A good architect solves problems. Through the eyes of the client, it seems like magic. But for us, it’s our job. It’s second nature. The Harold, a classic American Bistro that opened in 2014, began in a magical location –– Herald Square, which is graced by Macy’s Parade every Thanksgiving. When the owner walked us to the site, just around the corner from Macy’s, I immediately thought of the movie, “Miracle on 34th Street.” This restaurant is now an ideal gathering place in the heart of Manhattan, yet started with a challenging site … where, together with the client, we made miracles happen.

The owner had already established a deli in that area and knew there is plenty of foot traffic. Office workers would buzz in and out, for coffee in the morning and a sandwich for lunch. In the same building, he wanted to add an upscale restaurant with a bar and a dinner menu. So next door, he leased the tiny tourist gift shop. We realized, this space alone could not be a restaurant. He needed more.

Our first miracle: a storage room occupied by a tenant on the second floor became available. After we all looked over the space, the client reached out to the landlord to broker a space swap. Initially, the tenant was not receptive to the idea, through a rigorous negotiation, however, he consented. Just like that, contiguous square footage of 900 square feet was had for the second level space. Yet magic is never linear, and neither was this space.

When we started the design, the first two parts of the space were this tourist shop and the former fast food restaurant, the third was a prep kitchen along with the storage, and the last part was a subterranean space used by the gift shop as storage. We had a lot to work with –– the basement, the ground floor and second floor –– just not in any traditional layout.

None were connected by proper egress vertically. Despite misgivings, the team considered: How can we tie all the spaces together? Realizing the layout would not be horizontal like most restaurants, we created a vertical layout that flowed.

As guests walk in the ground floor, we envisioned, they’d see the bar and the dining area. With no elevator, a clear pathway from one floor to another was essential. So we designed a new set of stairs, both functional and decorative, to lead up to the second floor, a party room or extra seating during busy times for more lunches, dinners and happy hours.

We decided the logical location for the kitchen would be in the 800-square-foot basement, which looked quite small for a kitchen yet with the guidance of a kitchen designer became very efficient.

To add to the complexity of this puzzle, the restaurant has five additional floors above it for office use, making the exhaust duct for the kitchen hood close to impossible.

Searching for a solution, I crawled up the elevator shaft. Our last miracle was bringing in the exhaust ductwork from the basement all the way to the roof mainly via existing openings and cavity spaces above the ceiling of main corridors.

The Harold in Manhattan Reveals Views of Iconic Streetscape

By the time the contractor came on board, he was amazed that all the different spaces could be combined to create this wonderful space, which is not only beautiful but also efficiently planned to accommodate the restaurant’s needs.

The owner was concerned how the spaces could come together as one. With our guidance, he realized his dream. The Harold opened four years ago, and it’s still going strong. Restaurants in New York tend to have a short lifespan. Among all the competition, our client found and expanded upon space in a great location.

There are many vertical restaurants in New York, yet I think the experience in this one is unique. Trusting to our vision, the owner has created something really special. With a maximum amount of views toward the streetscape, I imagine it is filled on Thanksgiving, with guests watching the parade from the second floor, and throughout the holidays looking out onto the view of 34th Street … where miracles, like this one, can happen.

By Krista Hulshof
About the author

Eric Lam is the Principal of Redwood Design Studio Architect. Along with overseeing the firm’s day-to-day operations, he stays informed of every project while maintaining a hands-on approach to management. Eric’s professional expertise encompasses mostly hospitality design in which he has extensive experience leading projects from inception to completion. He has twenty years of experience designing numerous restaurants and hotel spaces as well as projects in other marketplaces. While he may be busy with client meetings or at job sites observing construction progress, he often spends leisure time in the great outdoors.