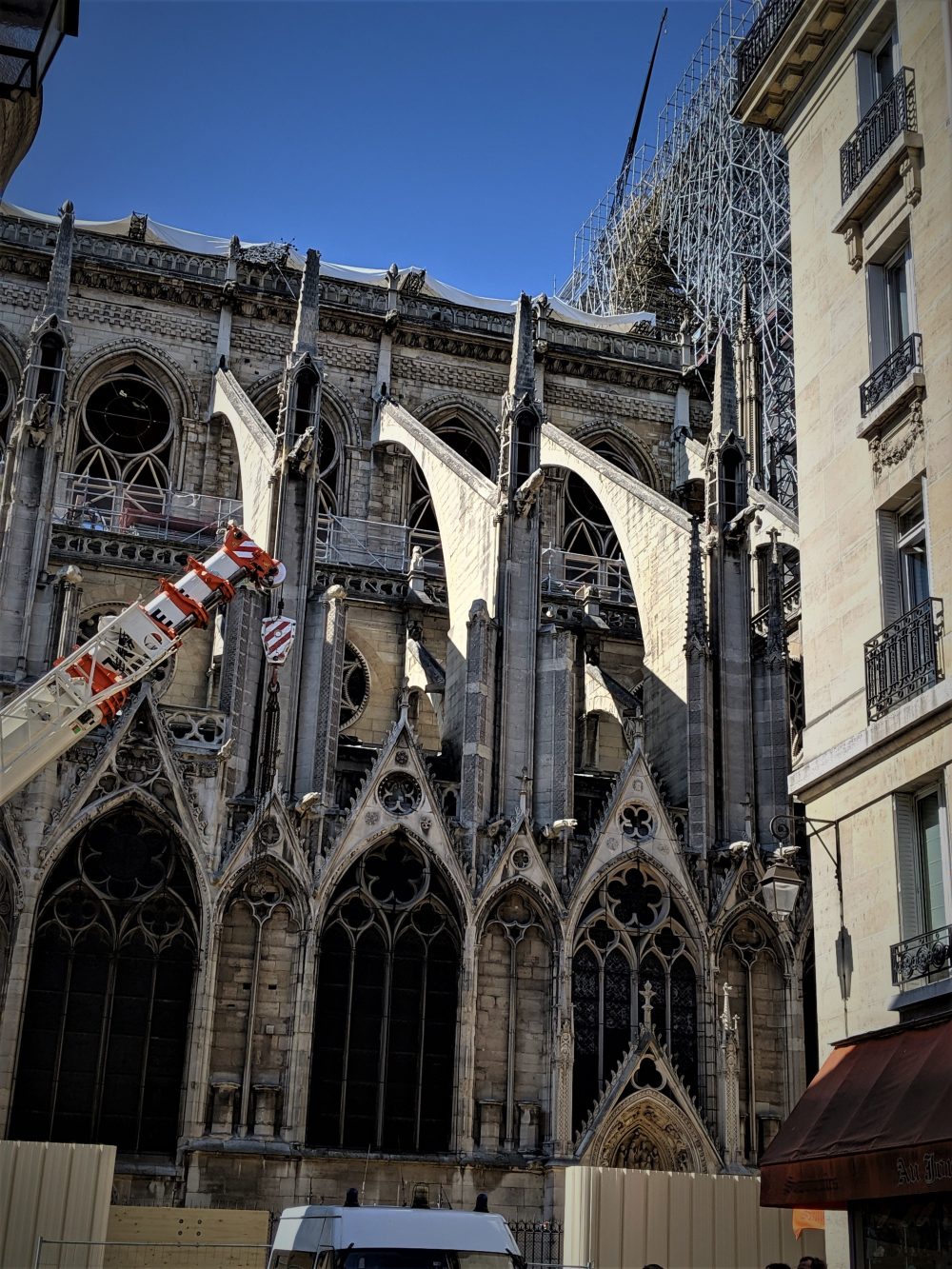 My first time in Paris was intense and telling. I visited just weeks after the Notre Dame Cathedral lost its roof and spire in a devastating fire. Not long after my visit, the French State issued a decree that Notre Dame be restored to the 19th-century version. It was obvious then, as it is now, that for Parisians, this is not a project — it’s their identity.

While visiting the ruins of Notre Dame, which architectural feature or lack thereof caught your eye?

I think ruins is probably the wrong word, the building is very much standing. But, the most notable feature was a person, not the architecture itself. The night before going to Notre Dame I was eating dinner with some Parisian friends. With much passion and emotion, they were dismayed at the proposals being made by the architectural community. My friend Cécile said, “This isn’t something we planned, this was an accident. Notre Dame is who we are, these ideas are crazy!”

After walking around the entire perimeter of Notre Dame the following day, my wife and I sat down at a cafe on the Île Saint-Louis across the Seine River studying the views of Notre Dame as we relaxed and ate. With this new perspective from a French cafe, I envisioned a glass spire and agreed, it just wouldn’t fit. In my conversations with the people of Paris it was clear that this was a wound that needed to be healed, not glorified. It is a mistake that must be fixed; a restoration, not a renovation.

How would a glass spire define Paris differently than I.M. Pei’s Louvre Pyramid?

I.M. Pei passed away just the day after I visited his Pyramid. Prior to going, I wasn’t quite sold on the glass. In fact, I’ve often made jokes about it. But up close, I loved it, so thoughtfully executed and purposeful in context. There’s definitely contrast there, but instead of being jarring and out of place, it feels like it was meant to be. Leading up to its construction, Parisians debated thoroughly, but they knew it was happening and there was a plan, a choice. The palace had been renovated a few times and used for different things, so the Pyramid expressed a new chapter in its life.

But Notre Dame’s purpose wasn’t and isn’t changing. It has been a fixture of consistency in a city that has experienced hundreds of years of tumult. It’s a beacon of strength and tradition.  As my friend Cécile said, Parisians don’t want it to be some modern reincarnation. “This isn’t something we planned, it’s an accident, and we should fix it.”

I can assure you Notre Dame is still standing proudly on the Seine. Roof scaffolding is present, but there’s no roof. Looking at Notre Dame closely and from afar, I got the feeling that it will come back with great strength.

What is your impression of other architectural feats in Paris?

We saw many amazing architectural feats, modern and ancient, but in general Paris is like a snapshot in time from the late 19th century. My friends weren’t thrilled with modern architects, but they are very proud of one architect. Georges-Eugène Haussmann was charged by Napoleon III to renovate medieval Paris, improve upon the disease-ridden community, narrow streets, and lack of fire safety. In the 1850s and 60s, he developed his now iconic Haussmann style of architecture. Since then, even today, the buildings that are being constructed in heart of Paris follow his principles.

Another monument that stood out was Sainte-Chapelle, a 13th-century Gothic church built in Paris around the same time as Notre Dame. It’s a gorgeous space expressing a distinct lightness through almost gravity-defying structure and stained glass. Sainte-Chapelle was a private chapel for royalty attached to the palace, while Notre Dame was for everybody.

How did the rest of your travels shape your experience of historic religious spaces?

I spent two weeks primarily visiting religious buildings, so I have more thoughts on this than we have time for. Moving through Spain, the Sagrada Família Cathedral in Barcelona shows how Gaudi took church design to a modern organic vernacular. Built in the 1200s, it is bathed in light and stained glass, like Sainte-Chapelle, and creates an other-worldly experience equated with divinity. Gaudi wanted to highlight the effect of light as a metaphor for filling the space with God. When I stood inside, I couldn’t help but feel connected to something greater. It was a very moving experience.

In contrast, the Toledo Cathedral is highly decorated, some would say in a way that’s over-the-top. Countless artists have come in and left their mark. With many different works competing for attention, I found it best to focus on one at a time — in those moments I felt closest to God and the thousands of faithful who came before me.

The Madrid temple of the Church of Jesus Christ of Latter-Day Saints is a modern building. It’s also very large but unlike the cathedrals, it’s divided into small intimate spaces. Instead of feeling in awe and connected to something outward, it inspires the inhabitants to be more reflective and connect inward.

We also had an amazing experience in St. Paul’s Cathedral. St. Paul’s burned in the Great Fire of London and was rebuilt in 1711. Not of the Gothic style, there are fewer windows, but the details and scale are still miraculous — rich in symbolism and art. Every square inch of St. Paul’s is gilded and painted and adorned with mosaic. Standing under its immense dome nearly brought me to tears.

One of the aims of classical cathedrals is to make you feel small in the grandeur of God. But I didn’t feel small Sagrada … I felt elevated and enlightened. St. Paul’s filled me with wonder and awe; from an architect’s point of view, I wondered, how did they build this so long ago? The craftsman and care and dedication create such incredible beauty, connecting you to something bigger than yourself.

How can Notre Dame serve as an opportunity for reconnection?

Great symbolism lies in what’s happened to Notre Dame. It’s not about a designer or an architect, it’s about healing — making something that was damaged whole again. I think it’s fitting the tragedy happened during Holy Week, once Notre Dame is rebuilt it will be, in a way, symbolic of the death and resurrection of Christ. I think it’s also a reminder that we, as humans, fall short and are all in need of healing and restoration. Hopefully, as people reflect on this, they will feel a desire to reach out and heal and help others.

The cathedral has endured riots, wars, and revolutions. How does this event contribute to its story?

Notre Dame has been, like the City of Paris, frozen in time. Since the 19th century, there has been some restoration but mostly the cathedral has provided a constant among the chaos. While turmoil has been swirling around Notre Dame since its inception, Paris relies on its constancy. That’s the legacy, despite it all Notre Dame stands as a beacon to the people of Paris, a symbol of God’s permanence.

You mentioned that the burning happened during Holy Week. What does this mean for the Catholic community? For France? How can this spiritual space rise from the ashes yet again?

Yes, I think in a way it is fortuitous that it happened during Holy Week — when people flock to church. Human nature is to turn to God in times of distress and pain. Look at the response, people gathered in the streets singing and praying. The tragedy resulted in what Holy Week is all about; turning to God and remembering the need for salvation. On my trip in May 2019, the Parisians we talked to, even those who are not very religious, feel Notre Dame is Paris. It’s part of their identity. For the Catholic community, it holds an even more significant place because of its place in church history. It’s also a prime example of a Gothic cathedral in Europe dating back hundreds of years.

In the U.S., we don’t have the same concept of time. Most structures we see were built in the past five decades. A very small percentage date back to the early 1700s. Then there are the things we don’t really talk about from the Native Americans that date back further, but these are architectural footnotes, not cherished monuments in the middle of our great cities. Our country is relatively new; for us, the 1700s are ancient history. For most Europeans, the 1700s are still fresh. When we think about making lasting and meaningful spaces in our country, we consider something that lasts another generation, maybe two. Europeans think multi-generational, eons of time. Spaces in Europe hold meaning that transcends any one person, any lifetime. And Notre Dame? It transcends religion, age, politics. I’m not worried about Notre Dame. Just like the colored light that will once again flood its interior, it has inspired and will continue to inspire the people of today and of the future.

Tim Alatorre is the founder and owner of Domum, which means “coming home” in Latin. Located in Northern California, Domum is an award-winning architecture firm known for expertly guiding their clients through the approval and construction processes. Tim has built a reputation as a problem solver who empowers his clients through a collaborative design process. He is the father of six children; he currently serves on the Architectural Review Committee and on the Planning Commission with the City of Rocklin. He also volunteers as a Scoutmaster for a local Boy Scout Troop. He was introduced to architecture as an elementary school student and the more he’s learned about the profession, the more he’s realized two things: first, he absolutely loves helping people create amazing spaces; and second, there is a better way to provide architectural services. Seeing the time and money his clients were losing, Tim invented the Domum Delivery Method™, which is now saving his clients both time and money.

By Mark Benner
About the author