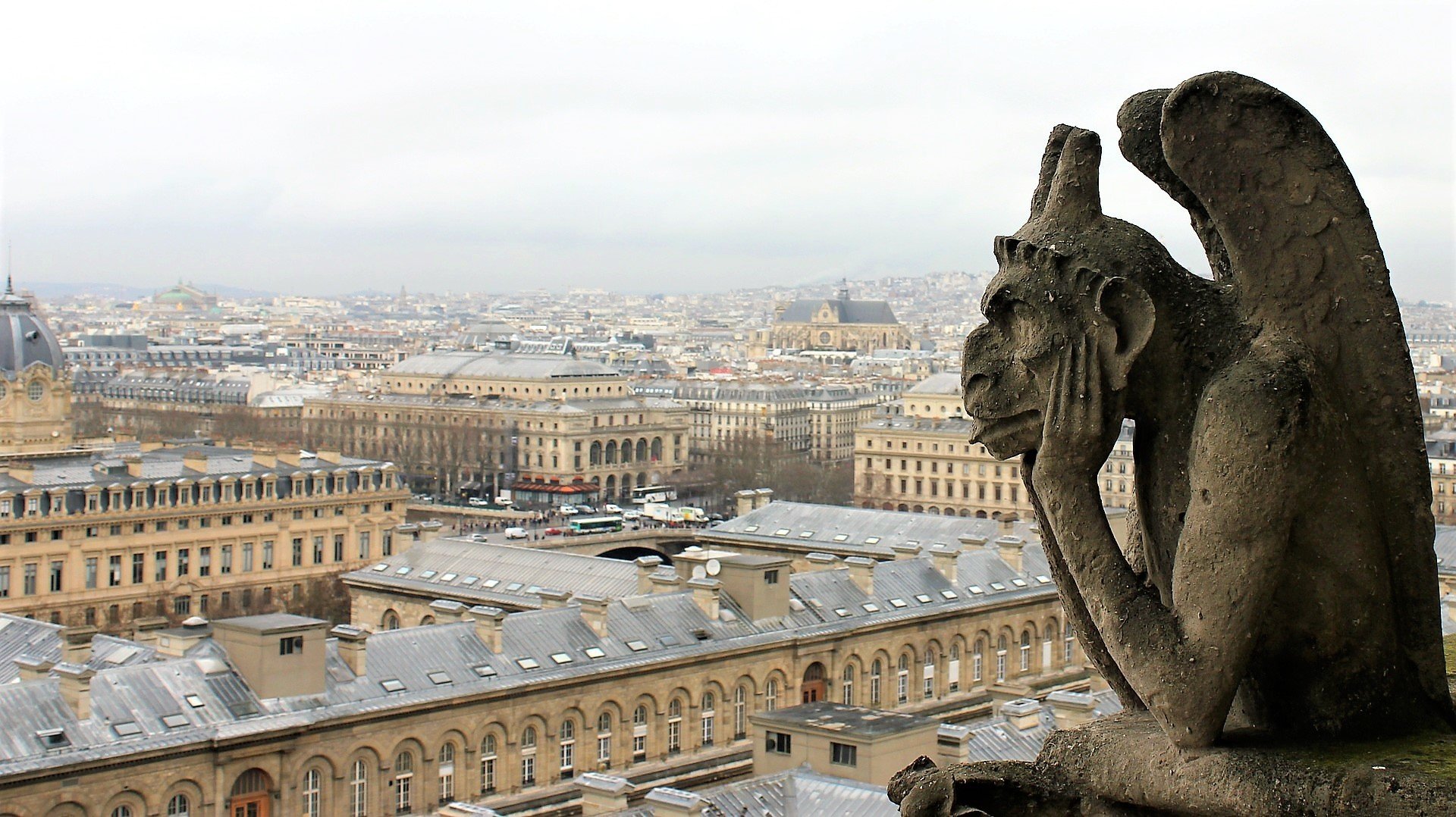 The Notre Dame restoration requires a delicate dance between traditional and modern architecture. In this Q&A with professional designer Colin Healy, we explore the opportunities for balance and collaboration as well as setting the proper precautions in place so that we don’t lose this international treasure.

As we consider these as well as other historical buildings that have been damaged by fire and rebuilt, what lessons can be learned?

The main lesson is the value of forethought. Planning preservation requires forethought from the very beginning. In Stewart Brand’s “How Buildings Learn: What Happens After They’re Built,” he tells a story about an old Gothic-style structure. Administrators of the centuries-old building realized its huge oak beams were being eaten by termites. Similar to Notre Dame, nobody knew where to get the wood. To everyone’s surprise, foresters of the institution revealed that their predecessors had planted a stand of trees just for this purpose — a forest passed down for generations. Three hundred years earlier, the builders and designers thought ahead to the distant future. So they successfully rebuilt true to the original!

Today, this wisdom and foresight is rare. We have so many new materials. We have a belief that we can accomplish anything through new technology.

How can this lesson be implemented in the Notre Dame restoration?

The reason why it’s a challenge to find wood for Notre Dame is that trees are seldom allowed to get as big as they used to. The New World was attractive to shipbuilders because, after depleting their tree supply in England, they finally found a place with massive trees to build the tall masts their ships needed. When they found the trees in the New World, they were enormous because had been growing and growing and not cut down. Only within two hundred years into discovering the east coast, they cut down most of the forest for agriculture and industry.

Today, who’s going to be the steward of our natural resources? As an example, we know that we have to stop using oil soon as a way to run our homes and vehicles, and yet there’s still tension. I hope the restoration for Notre Dame can inspire forethought and care, that people will be inspired to protect resources — Notre Dame could become a touchstone for increased consciousness.

When the fire happened in April, how did you first react to the news?

I felt disappointed because whenever you lose a work of art like that, it becomes very difficult to rebuild it in the same way that existed.

Yes, and meanwhile Patrick Chauvet, the top administrative cleric at Notre Dame, stood in shock at the scene. He asked: “Why?” — What deeper meaning do you find?

Seeking deeper meaning can be important, but I try not to go down blind alleys. I see this event as an example of how people lack care on job sites. Why is it that on this national treasure, no one thought to include fire protection in the plans for the work on the building? With a building as tall as it was, there should have been strategies in place for how to deal with a fire. While it’s not possible to use modern fire protection techniques like sprinklers, there could have been better protocols in place.

Symbolically, Gothic church architecture is designed to imbue worshipers with a sense of awe. Most traditional churches have a long nave, an altar, and a soaring ceiling to inspire a sense of awe in something beyond ourselves. If man could accomplish such a feat, some believe, it must be the will of God. Whether you are a believer or not, what better reason to take care of this great artistic expression?

Why is this both a tragedy and an opportunity for restoration?

We do have different ways of doing things today. Just for the safety of the occupants, there will be a lot of thought directed to how can we rebuild this in a way that we won’t lose it again. But it was really fortunate that no lives were taken in the fire — it would have made it a human tragedy. Notre Dame presents an opportunity for restoration, through careful examination of a key question: How can we employ modern building techniques without compromising the spirit of the existing structure?

French President Emmanual Macron plans for the restoration to be done in five years in time for the 2024 Summer Olympics. With a growing budget, how could this project be completed on time? Does it seem feasible?

To keep a timeline like that will take an immense amount of cooperation, so I’m not sure it’s wise or feasible. Notre Dame can, and should, take a number of years to reconstruct. Think of the natural ways it’s been done in the past. Trees were cut down, dried in specific conditions, all the while considering how beams can lengthen and shrink. You need to start with dry, seasoned materials, to do it in such a time frame — allowing for brand new trees and the time needed for them to dry.

Millions of dollars are pouring in from UNESCO and other donors to fund the restoration. Is it possible for the restoration to help other world issues get resolved?

When something of this magnitude happens it will attract people who want to be associated with the valorous act of saving the building and that’s good. But there are many pressing issues, climate change and other outcries that are happening in the same city. It’s rare for chronic needs to gain that kind of support.

Any church embodies deep meaning. Church architectural expressions span from the grandness of the Gothic cathedral to the simplicity of the Quaker meeting house.

In any case, the church is a container of meaning and tradition of utmost significance. I would hope that Notre Dame’s church leaders could use this loss as a rallying cry to direct people’s attention toward the needs of society as well as recreating the building.

Yes, Notre Dame could be a vessel for change. In this global spirit, Macron wants to combine efforts within and outside the EU to reconstruct the building. Pope Francis mirrors the theme of community, calling the cathedral an “architectural gem of a collective memory.” Why is it important for architects and other professionals to collaborate on this project?

There’s a relatively small pool of people to pull from for the trades, with a specialty in particular skills, such as stone masons, so the restoration presents the opportunity for individuals to develop and revive old skills and collaborate with one another.

In historic preservation, sometimes the building is rebuilt the way it was originally, and other times it’s rebuilt so that it looks like the original. Looking at Notre Dame’s beams, perhaps a steel structure of the roof that would be fire protected could be wrapped with veneer, constructed of large pieces of wood that would resemble the original beams with all the original details. To hide the HVAC and other modern systems, it will be primarily architects who will make artistic and aesthetic decisions and the engineers will move it forward. The Notre Dame restoration from the perspective of architects and designers, while including other voices that need to be heard, is a complex topic. Some people favor staying 100% traditional, while some explore modern approaches. All the while, all are asking the same question: How can we save it?

From a more technical perspective, let’s talk about fire safety. Why is it a challenge to protect historical buildings from fire?

Gypsum board is typically used in buildings today to protect steel structures from damage. Rated assemblies in buildings are classified by the amount of time fire would take to penetrate through a particular assembly. Often, this involves single to multiple layers of sheetrock or sprayed gypsum product applied to beams to keep them from buckling under heat.

Yet wood can be quite durable against fire — in fact there’s a movement today in building tall timber frame buildings because, once the beam is charred, the wood resists the flame. I wouldn’t be surprised if large expanses of beams of Notre Dame were intact a long time, and that the roof and deck collapsed around it because these beams are quite good at resisting failure in fires.

Particularly the conversation on materials sparks a conflict, yet reveals an opportunity for how modern building technology and traditional architecture can come together.

At Notre Dame, the firefighters couldn’t inundate the limestone building with water because it would compromise the structure. What makes this material strong and weak?

Like wood, limestone has vast potential and yet significant disadvantages as a structural material in modern architecture due to its susceptibility to damage from acid rain. Today, limestone is used often for cladding. Many skyscrapers in NYC are clad with limestone as the exterior material, but supported on a metal tab system, so the steel is doing the supporting and limestone is doing the decorative work and acting as a weather screen.

How faithful should architects be to the 19th-century version?

I think they need to be as faithful as possible, given that it is a collaboration across centuries. Frank Lloyd Wright or Louis Kahn, for example, were able to design a building and say this is exactly how it should be done. Within their lifetime, the buildings were completed. But Notre Dame was built over generations. Whoever created the first version would probably not recognize the final version. So many changes made due to artistic vision and new techniques continue to solve design problems. Notre Dame has been restored before in the spirit of collaboration and progress. Designers and builders can capture this spirit now.

It is especially unfortunate that the event happened during Holy Week. What does this mean for the Catholic community? For France? How can this spiritual space rise from the ashes yet again?

It’s all up to the people. A building is inanimate; people are alive. It takes people to make a story and direct energies and resources. Some will be looking to church leadership for inspiration, but I would also say the leadership in the church may have a myopic view. People of all walks of life should step up and make their wishes known — those in power should do as much as possible to make the will of the people a reality.

When people look back on this in 50 years, what perspective might they gain?

I hope what they see is that people felt galvanized to take action on something greater than the rebuilding of a structure, and took it on as a movement with a higher purpose.

By Mark Benner
About the author